I don’t think that there is any other half-hour of television broadcasting that has affected me as deeply as the Twilight Zone episode entitled, “Walking Distance.” It stars Gig Young, who portrays Martin Sloan. It is a thinly disguised autobiographical episode reflecting the thoughts and feelings of the late, great, genius, Rod Serling.

I am by no means inferring that I am anywhere near being in the same league, as a writer, as that of Rod Serling. But what I am saying is that I can identify so strongly with this episode of Twilight Zone. 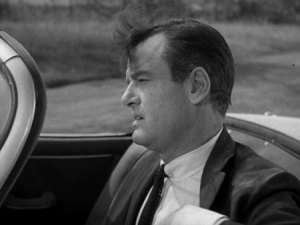 Martin Sloan is at his wit’s end with his job at the ad agency. He pulls into a rural gas station and tells the attendant, in a voice tone that overflows with frustration and a bit of anger, “yesterday I just got in the car and drove. I had to get out of New York City. One more board meeting, phone call, report, problem. I would have jumped right out of the window.” 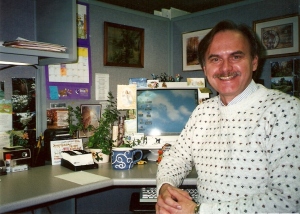 A photo of myself at my desk at the ad agency.

I know that frustration all too well. I spent five years of my life, working in the Editorial Department of an ad agency. There is a thread of insanity that runs through an ad agency. The absurd deadlines, the inconsistent thinking of the big shots, the ridiculous expectations put upon writers, the hard core pressures that are put upon editors and copy writers, the fury, the short-tempered attitude of executive row. 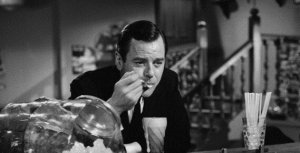 Martin Sloan at the counter of the old fashioned drug store.

In this Twilight Zone episode, Martin Sloan returns to his old hometown of Homewood. He goes to the old drug store soda fountain counter, which he remembers from his childhood and youth. It is a place of solace and refuge for him. It is so very eerie and haunting, how much I identify with Rod Serling’s retreating to go to the old soda fountain counter and have a chocolate soda. For myself, in the midst of the insanity of working in an ad agency, I often found solace and comfort in returning to Moe’s Sweet Shop. To sit at the counter on a rotating stool, as I had done so many times in my childhood and youth. 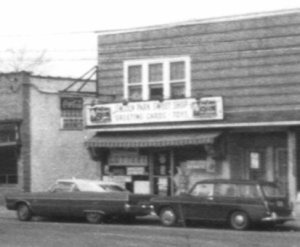 Moe’s Sweet Shop, circa 1967, where I sat at the counter when I was a child and teenager.

3 Responses to Reflections of Walking Distance