Posted on September 9, 2016 by richardmabeyjr

The haunting, eerie Indian head of the Old Lincoln Park Museum, was always placed on the right hand side of the old map of Morris County.

Of The Old Lincoln Park Museum

From about 1985 through 2005, the Old Lincoln Park Museum featured many unique and one of a kind museum pieces. One of the most unusual and unique pieces of the Old Lincoln Park Museum was the Indian head. It stood a good two feet in height. It was heavy. I would it say that it weighed at least 30 pounds. It was made of plaster of Paris. It was hand painted. I believe that it was Art Smith, the noted historical artist of Lincoln Park, who painted the old Indian head. Also, I believe it was Art Smith who may have actually molded the old Indian head. 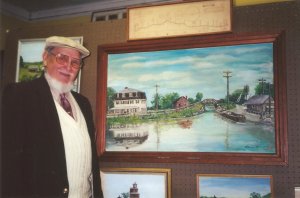 Art Smith, the noted historical artist, was most likely the individual who not only molded the old Indian head, but probably also painted it as well.

It’s funny, several times I did ask Art Smith if he molded and painted the old Indian head. He would just smile and then laugh. Then he would say something like, “I don’t know, maybe I did. I can’t remember.” Then he would laugh some more. Respectfully, Art Smith was a bit of a character. In many ways, he brought a certain Mayberry feeling to the Old Lincoln Park Museum. Once again, with respect, I have to say that in a certain kind of way, Art reminded me of Floyd the Barber.

I loved to write historical articles at the old desk of the Lincoln Park Museum. There was a wealth of information, about local history, to be found in the old and rare books that filled the museum’s book shelves.

From the mid 1980’s and through Year 2004, I loved to write historical articles at the desk of the Old Lincoln Park Museum. Hundreds of these articles were published in local newspapers. The museum had this incredible little library of rare and old books that were filled with golden bits of info about local history. In the days before the Internet, this was just a great place to have all this historical information at my fingertips. And, after hand writing my articles, I loved to type them up for the local newspapers on the old mechanical typewriter at the museum.

The 2002 Preserving History pull-out section of The Weekly News, was something that I was very proud of. I had written nearly two dozen historical articles for this special presentation of TWN.

It was in 2002, that I was writing a series of historical articles centering on Lincoln Park’s colorful heritage. I would often write my articles at the little museum, in the evening after working all day long at the ad agency. Well, one evening, I lost myself in writing this one particular article. I remember that I had finished writing the article, in old-fashioned long hand. Now, I was typing the article for The Weekly News special pull-out tablet titled, “2002 Preserving History.” All was quiet, except for the ticking of the old clock on the wall. And, of course, the clicking of the keys of that old typewriter.

The lights in the Old Lincoln Park Museum were a combination of circular and long fluorescent lights. They would often blink on and off, without any reason or rhyme.

There was a still and quiet feeling to the night. I was working on writing my article. I had lost track of time. All of a sudden, one of the circular fluorescent light bulbs, just above the old Indian head, began blinking on and off. As I looked up from my typewriter, looking across the room of the museum, it happened! The old Indian nodded at me. 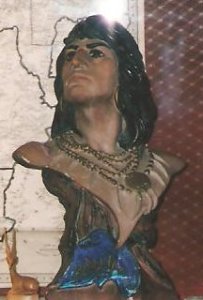 The old Indian head, that proudly stood beside the old map, had a certain eerie and haunting quality to it.

I remember that it scared the living daylights out of me. I quickly removed the sheet of paper, that I was typing my article on, from the old typewriter. I put my paperwork in my carrying case. Then I quickly walked to the front door, turned off all of the lights in the museum, walked out the door, locked the door and then walked to my car in the little parking lot by the museum.

Looking back, I am sure that it was my imagination. I was tired and weary from working all day. Night had fallen. Then suddenly the circular fluorescent light began blinking like a neon light. But then again, could the old Indian head had really given me a nod?

2 Responses to The Haunting, Eerie Indian Head Of The Old Lincoln Park Museum