Posted on August 2, 2016 by richardmabeyjr 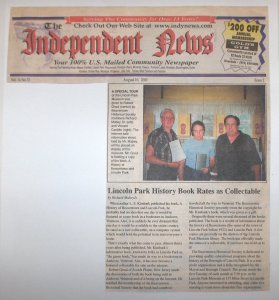 This is the Independent News front page story that I wrote about Lincoln Park’s famous “green book.”

In every small town in America, there are legends that are bigger than life. There are those elements, those things which hold an unspoken reverence. “The Green Book” is something that is held in awe in my old hometown of Lincoln Park, New Jersey.

“A History of Beavertown and Lincoln Park” is a book that was published in 1971. It was written by a long-time resident of Lincoln Park, by the name of L. S. Kimbark. The book is a hardcover book of 122 pages. The front and back covers are dark green in color. Hence the nickname, the green book. Sadly, Mr. Kimbark passed away several years ago.

I will never forget this day. My dad and I were on duty at the Lincoln Park Museum, giving tours to people who came to visit the charming little museum. It was almost 16 years ago! Well, lo and behold, in walks Mr. Robert Graul, one of the long-term members of the New Jersey Canal Society. He had this sheet of paper in his hand and couldn’t wait to tell us his good news.

Well, Mr. Graul wasted no time to tell us that the green book had somehow found its way all the way up to a little bookstore in Andover, Vermont and was selling for well over a hundred dollars! In small town life and culture, that is big news! And that wasn’t all. Mr. Graul was happy to tell us that “the green book” was on an Internet auction site and the bids at the time had climbed to well over 50 dollars. Not bad, for a book that once sold for five dollars a piece!

I think that at that point in time, we had only four copies on the green book on the bookshelves at the town museum. Dad and I decided to archive three of the books in the back closet, till the next meeting of the Beavertown (the former name of Lincoln Park) Historical Society. We figured that the rest of the members could decide what to do with the remaining four green books.

The funny thing of it is that after I wrote a short article about the good news of the green book becoming a hot collectible, I showed it to my editor at the Independent News. She was very hesitant about putting the story on the front page. After all, the Independent News was one of the largest circulated regional weeklies in all of New Jersey. With a circulation of over 55,000 copies per issue, the paper was circulated in 18 other towns, besides Lincoln Park, in the northern New Jersey area. And, this included Paterson, one of the largest cities in New Jersey!

Here’s the amazing thing. Having agreed to place my short article on the front page, along with the photograph that I had taken, my editor was pleasantly surprised to the incredible feedback that she received from this article. Dozens upon dozens of people either called the paper, wrote a letter to the editor or sent an email to my editor, asking about the green book.

Overnight, the green book became a hot collectible in dear old Lincoln Park. People went up in their attics to find their copy stashed away in a cardboard box that also contained their old yearbooks. The local barber removed it from his little magazine table and kept it on his shelf, next to his collection of old hair lotion bottles. Some people decided to put their extra copy up for sale on an Internet auction site. It was just a great moment in Lincoln Park’s history.

Today, I live in one of these big gated communities in Central Florida. I have to confess that I miss those Mayberry moments, where the seemingly simple things of life are celebrated with such joy and enthusiasm. I often wonder if Andy had an old copy of the “History of Mayberry” hidden away in one of his desk drawers. Perhaps, hidden away in his bottom drawer, so that even dear old Barney couldn’t find it. But then again, maybe Barney had a copy hidden in one of those drawers of the corner filing cabinet. You just never know.

2 Responses to The Green Book