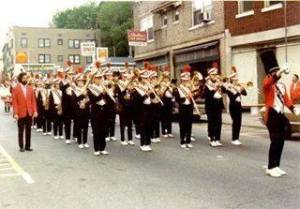 A photo of Boonton High School’s marching band, in a parade in Boonton, NJ. Sincere thanks goes out to my friend, Bill Accinni for providing this great photo.

In September of 1967, I started my freshman year at Boonton High School. Upon which, I joined the school’s marching band. This is pretty amazing. While going through old paperwork, I found this poem that I wrote in June of 1968. At that time, I had just had the honor of playing the bass drum in the Lincoln Park Memorial Day Parade, for the Boonton High School Marching Band. So without further ado, here is the poem, just as I had written it when I was 14 years old!

The bass drum is the pounding heart,

the marching band livens the parade.

Sweet melodies are ensued by oboe and clarinet,

the music halts, the cadence quickens,

This is true Americana,

which we all cherish, nurture and grow by!

On the original, hand written poem, I have the date, “June 1968” written on the page. I probably wrote this the very night after the Lincoln Park Memorial Day Parade or a few days later.

1 Response to The Passing Parade