A Most Painful Truth 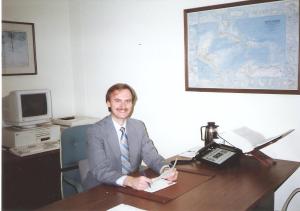 There was a time when promise filled my work experience at Amalgamated Consolidated.

A Most Painful Truth

The corporate name of Amalgamated Consolidated is a fictional name of a real corporation that I worked for, from the late 1980’s till the late 1990’s. I changed the name of the company, well….. because I just don’t want to get sued.

It was around 1991, that my boss Mr. Grindstone, called me in to his office. He explained to me that Amalgamated was going to start a new monthly publication dedicated to the customer base in the African continent. I thought I was dreaming when Mr. G told me that he had recommended my name to be the grand Editor-In-Chief of this monthly publication, which at that point in time was just on the drawing boards. I was deeply honored.

Then Mr. G told me that I would have to take a series of tests, which were required for this particular advancement of my career. I quickly agreed to take the tests. Mr. G warned me that the tests were very difficult and that he expected me to do well on them. Mr. G also explained to me that I would need to study hard for these exams.

Well, about a week or so later, Mr. G told me that I was scheduled for to take this series of tests for my advancement. The testing time period was two full days. There were 12 tests all together. One test was on mathematics. Another one was on business writing. There were also tests on logical thinking, general computer skills, the history of Amalgamated Consolidated, and general product knowledge. There were also practical, stand-up exams on public speaking and person-to-person business interaction skills.

Long story short, I took the 12 exams. I blew them out of the water. I did not get less than 95% on any of the tests. Mr. G told me that, in all of his time in management, he had never seen an employee get such high grades. It’s not that I’m so smart, it’s just that I studied, studied and studied for these exams.

Well, after Mr. G went over my exam results with me, he assured me that it was now just a formality to have Mr. Topgun sign the paperwork for my big advancement. Then Mr. G proceeded to tell me that he would probably know, yay or nay, if I was going to get this big promotion.

Well, about a week later, Mr. G called me into his office. There was a certain look of sadness in his face. It was a kind of “sit down, I’ve got bad news,” look that prevailed on his face. As I sat down in the chair, across from Mr. G’s desk, Mr. G cleared his throat. This is pretty much the way the conversation went.

“I see, Mr. Grindstone,” I replied with a bit of sadness in my voice.

Then Mr. G took the colorful pie graph that was on his desk, he turned it around so that it faced me. Then, he slid this sheet of paper toward me.

“See this pie graph, Richard. As you know, we do a lot of government work. Each different color slice of the pie represents a minority group,” Mr. G explained to me.

“Well, Richard, we must comply with certain standards to allow for affirmative action. We must….. well, I think you understand,” Mr. G told me, with a touch of compassion in his voice.

“I understand,” I calmly, but sadly replied.

“Now, Richard, I don’t want this to set you back. You’re time will come. You just have to be a little patient, that’s all,” Mr. G said to me in a bit of an uplifted voice.

“No, I won’t give up, Mr. Grindstone. I understand and respect your position,” I replied.

“Good, Richard, that’s good. You’re a good employee. You always are here early for work. You stay late when I need you to. You give up your lunch break, if need be. No, I don’t want you to feel bad. This is nothing personal,” Mr. G assured me.

“I understand Mr. Grindstone. I really understand,” I replied with as much of an uplifted voice tone that I could find within myself.

And that was that. This is a true story. The dialogue that I presented, is the absolute best that I remember it. I’ve done my absolute best to present this chapter of my life, with true blue honesty.

I am going to make a statement here that I know a lot of people will say is not true. It doesn’t matter, because in my heart of hearts, I know it is true. It is not my purpose to present a political statement. Rather, to just present one chapter, one honest memory of my working career.

Without further ado, here is my bold statement: white men are subjected to prejudice in the corporate world. I know some of you will write me and tell me it is not true. I respect your opinion, I really do. However, I know in my heart of hearts, that I was the victim of prejudice for being a white male and unable to fill in any of the pie slices of the affirmative action pie chart.

This entry was posted in Amalgamated Consolidated, Be Strong!, Believe in yourself!, Dangers of being too trusting, Determination, Dreams, Encouragement, Faith, Finding Your Purpose in Life, Humility, Life's Dreams, Memory, Modern Life, Never give up!, Spiritual Lesson, Surviving Prejudice, Wisdom. Bookmark the permalink.

2 Responses to A Most Painful Truth