A photo of the dedication article that I wrote for the Weekly News’ special pull-out section that featured many articles that I wrote about Lincoln Park’s history.

There are times when we all face betrayal. Sometimes it is betrayal from the very people whom we admire and deeply respect. Such a betrayal came to me when I was 48 years old. I thought I had reached an age where I had climbed the pinnacle of wisdom. I thought that I had reached an age of gaining a certain understanding of human nature. I was wrong. There were still more lessons to learn about the inner ticking of people. 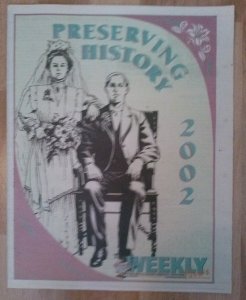 The cover of the Weekly News historical special pull-out section from the June 27, 2002 issue.

It was some time in early April of 2002 that my editor, Judy Lutolf, asked me to write a series of articles on the history of Lincoln Park for a special pull-out section for an upcoming issue of the famous Weekly News. And, with that special historical booklet, came to me the task to write a dedication. It was a job that I took very, very serious.

After putting much thought and prayer into the matter, I decided to dedicate the historical booklet to the men and women, of Lincoln Park, who had lost their lives fighting for democracy. To my amazement, there was some discontent by some of the residents from my beloved hometown. I really and truly couldn’t believe it. Some folks told me that they really felt that my dedication was not inclusive enough. That I should have dedicated the historical pull-out section to all the veterans of Lincoln Park, not just those who were killed in battle.

But, alas, that was a long time ago. It was nearly 14 years ago. In some ways, it seems like yesterday. Yes, the criticism that I endured regarding my dedication did hurt. But I soon got over it. And, yes, I did forgive my critics, who had said some rather unkind things to me about it. Life ain’t always fair.

I remember that I chose an old photo of the old Lincoln Park Town Hall to be placed above my dedication. It seemed fitting and proper. The building had originally served as the town’s fire house. I had been told by several of the old time residents, that the photo that I had used for the dedication, was taken some time in the early 1940’s.

Despite facing my critics, I still stand proud of the dedication that I wrote. And, if I could turn back time, I wouldn’t change one word of it. To all my friends out there, pursuing the completion of an artistic or creative project; it’s sad to say but painfully true….there will always be critics out there.

I look back on the hurt that I endured from a few of the people who were so critical of my short dedication essay. In many ways, it was a gift. It showed to me that even the most earnest and sincere endeavor, at times will be subject to unfair and hurtful criticism. But despite it all, life goes on.

And, when all is said and done, after enduring unjustified criticism, there is only one thing a person needs to do. And, that is to dust yourself off, stand tall and proud, pull up your boot straps and get back on your horse. Because in walking the trail toward success, quitting is not an option.