Posted on December 13, 2015 by richardmabeyjr 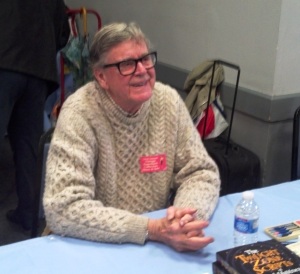 A great photo of the wonderfully talented Earl Hamner Jr. I personally like this photo a lot because I think it really does capture that sense of appreciation that Mr. Hamner holds for his thousands upon thousands of fans.

To say that I am a fan of the endearing writer, Earl Hamner Jr., really does not quite define my respect and admiration for this incredibly gifted gentleman. I am, for the most, dearly indebted to him for all that he taught me through his many novels, films and television series.

In all of Mr. Hamner’s works there is this golden thread that weaves in and out. This precious golden thread speaks to the inner chambers of our hearts. For in his writings, Mr. Hamner, shatters the illusion that we are bound to differences in our races, cultures, religions and politics. Through a delicate sensitivity and a keen understanding of what moves the human heart, Mr. Hamner, gently whispers to us over and over again that we are all one race; the human race.

I think that Earl Hamner Jr.’s affect upon the world is monumental. Honestly, I doubt that even Mr. Hamner himself could ever fully understand the positive affect he has had upon thousands upon thousands of people, from all over the globe. What always impresses me is how Earl can take the simplest, most mundane, ordinary moments of life and convert them into majestic and monumental moments. He has taught me to find the nobility, the immense value, the royalty; in each and every single person who walks the earth.

In the television series, “The Waltons,” we don’t find ourselves drawn to the rich doctor, or the hot-shot lawyer, or the dynamic detective. Instead, we find our hearts are moved by this very humble, close-knit, loving family; struggling through the tough times of the Great Depression. Yet in spite of financial challenges, we find a family that is wealthy in the things of life that are really important. For, as the series unfolded, we came to learn that this close-knit family did so very much to help each other, to sacrifice, and to work in such an inspiring unselfish manner.

My dad and I used to watch “The Waltons” together. My dad simply loved the show. My dad and I traveled from our hometown of Lincoln Park, New Jersey to Schuyler, Virginia, at least a dozen times over the years. Dad loved visiting Schuyler. In the dawn of 2006, Dad was diagnosed with pancreatic cancer. During his fight with that terrible disease, Dad and I used to watch “The Waltons” a lot. I had taped pretty much the entire series on video tapes. In May of 2006, my beloved father went Home to be with the Lord. On the very day, before his passing, we had watched an episode of “The Waltons.”