Remembering the Process of Editing Film

Posted on December 1, 2015 by richardmabeyjr 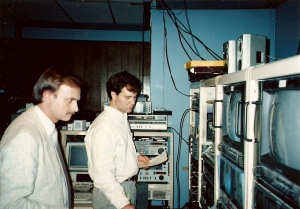 The process of editing film, was one of my favorite aspects of producing and hosting the television talk show, Cross-Talk.

Remembering the Process of Editing Film

For five years of my life, with the help of the good Reverend Melvin Travis, I produced and hosted a weekly television talk show. For me, one of the favorite aspects of the entire production process, was editing the program.

It was 1993, I was 40 years old, and I worked three jobs at the time. My eight to five job was working in the public relations department of an international telecommunications company. Then, two nights a week, I taught creative writing classes at a local North Jersey college. Then, in my spare time, I produced and hosted the television talk show, Cross Talk.

A couple of nights, each week, I would drive from Morristown, where I worked at the phone company, to Dover, where the television studio was located. Most of the time I would work on the editing process till 11 o’clock at night. Then, I would drive home to Old Beavertown, only to get up at six in the morning to do it all over again.

It’s a funny thing, for the past month or so, I’ve dreamt that I was back in the television studio, editing film. It was a painstaking labor. There was quite a bit involved in it. We used the three camera system, when we filmed Cross-Talk. So, there was a lot involved in choosing which camera angle to use, the overall timing, and creating that warm and fuzzy feeling for the show.

What’s even stranger, is that when I’m at work lately, I find myself thinking more and more about the job of editing film. I remind myself that I had my turn at bat. That I’m 62. There’s bocce ball, three or four writing classes to attend, and a host of other clubs and groups to join in this glorious gated community. But still, my heart calls back to the memory of producing a weekly television talk show.

Sometimes I think to myself that maybe it’s time to hoist the sails and set sail away from this dreamland retirement community. Maybe it’s time to return to the real world once again. Lately, I’ve been praying more and more for a sign as to what to do.