My Tribute to Reverend Melvin Travis

Posted on October 22, 2015 by richardmabeyjr

Working with Reverend Melvin Travis was a great honor for me.

My Tribute to Reverend Melvin Travis

From 1993 to 1997, I worked with Reverend Melvin Travis on a television talk show, called “Cross-Talk.” The show was shown throughout the state of New Jersey, every Wednesday night at eight o’clock, on the Cable Television Network of New Jersey. While it was a lot of fun, I have to confess it was a lot of hard work.

But that is the whole point of it all. Reverend Travis had this gift for making hard work seem like fun. It was truly a natural gift. When you produce and host a weekly television talk show, time is of the essence. And, sometimes tensions build with the staff. Well, Pastor Melvin had this uncanny ability to tell a joke, lighten the heaviness in the air, and help the staff to put it all in perspective.

The single most commonly asked question, that people who knew me would ask me, was this one: is that real? They were talking about the fun-loving, easy going, bright and easy rapport that Pastor Melvin and I had on the show. We used to do this conversation routine in the very beginning of the show. There was no script. The whole thing was real. We really were Andy and Barney talking on the front porch in Mayberry.

I don’t know how many television shows that we produced together. I know it was a lot! We used to film the show at County College of Morris. We genuinely had a good time. A lot of the staff members, also worked on other television talk shows. But, so many of the staff would tell us that they actually looked forward to working on our show! Sadly, they admitted that they dreaded working on some of the other talk shows.

In all the time that I worked with Pastor Melvin, I never once heard him raise his voice at a staff member. And, there were plenty of times that I know that the good Lord was testing our patience. Little stuff, like problems with the sound coordination, or the lighting would be way off course, or three camera operators called in sick that day. Little things like that. But, truly nothing would ever get the best of Pastor Melvin. 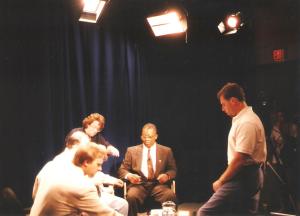 It’s funny. We ran the show “live.” In other words, when our Director called out 5… 4…. 3…. 2…. 1.. and ACTION! We ran the whole 28 minutes non-stop! Once in a while a guest would get side tracked. You’d have some fellow on, who was some big wheel director of community affairs in Squirrel Valley, and he would start talking about the apple pie that his wife baked the night before. It was amazing! Pastor Melvin would then say something like, “that’s nice, Tom! I’m sure the apple pie was delicious. But, now, you were saying that you needed more appropriated funds for swing sets in the public parks.”

All in all, it was an honor and a privilege to work with Reverend Melvin Travis. In retrospect, I consider myself dearly blessed to have had the golden opportunity to work with such a talented, intelligent and caring individual as Pastor Melvin. It is a memory that I dearly cherish.